Creating and testing a Finite State Machine (FSM), especially one that is complex, having infinite possibilities, can obviously be a daunting task. And the end-users of our customers were no different. A lot of assistance from the Application teams was required in defining and programming the FSM.

But, of course, the pain point here was two-way. The Application engineering teams too had to spend a lot of time working with individual end-users to understand their needs, manually write the assembly program, handwrite the code, test the chip (here, a scalable PMIC chip that would program this FSM) and send it out to them.

Painstaking it was, but this entire process flow sliced away one major factor: Time. Not only did end-users face a long lead time in the ‘create-test-repeat’ process but the entire process also consumed a sizeable amount of time, ranging somewhere between 3- 6 months, or even longer before the product could go live! 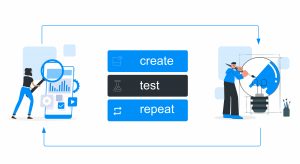 The goal here was quite simple: “make the end-user independent” with a simple evaluation and integration process and thereby reduce the dependency on the Application Engineering teams.

An end customer-focused GUI was what we needed- an Intuitive, Easy-to-Use, One Point GUI solution. One that could relieve these pain points yet be customized for the various needs of all types of end-users.

So, we collaborated with the customer analyzing various workflows and complexity to understand the end-user perspective (after all, the GUI was meant for them!) and devised a workflow. With an iterative design thinking approach, the team of UX designers and developers came up with low-fidelity mock-ups, followed by iterative prototyping to high-fidelity mock-ups.

Spanning over a period of nearly 2 years of continuous iterative prototyping, A/B testing, development, and feedback from selective groups; incremental releases were executed, which were then tested in the field, finally leading to today’s PMIC GUIs.

Some of the key elements that were centered upon were

With inbuilt templates to start with and a graphical-based workflow, customers needn’t have to depend on the App Engineer or any long document to create their programs. Now, all that he/she had to do was just click it ON, start modifying and create a solution!

While an Intuitive GUI was the solution, designing it for an FSM with infinite possibilities, was a great challenge. These possibilities along with the latency in programming due to a large number of registers posed integral issues. However, with a user-guided flow carefully tuned for different use cases through user feedback, and bulk read and write algorithm, these issues could be redressed effectively. 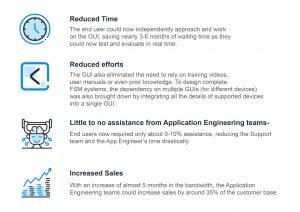 With independent customers and greater bandwidth, Apps Engineers could now cater to a larger spectrum of customers. The PMIC GUIs had surely resulted in an efficient win-win solution for both!

Kindly fill in the below details to download this case study.

Engage With Our Experts

Please enter your details, one of our solution expert will reach you for having discussion.

Please fill in the following form and we shall get in touch with you soon to set up a demo of the requested service/product. Thank you!

Submit this form and the PRIM Brochure document will be sent to your email.